Launched in 2018, the Intel Core i9 9900K holds the special honor of being Intel’s first Core i9 chip. We all know that in a gaming PC, the GPU has the biggest impact on performance among all the other components, but the CPU is also important.

With the Intel Core i9 9900K, you get eight cores, sixteen threads, and the capacity to boost up to a maximum 5.0 GHz clock speed. So, it’s important to find a GPU to match so you don’t leave any performance on the table. In this article, I’ll recommend four great ones.

Here are the technical specs of the Intel i9 9900K:

When building a PC for gaming and streaming, one rule of thumb to go by is that you should spend 1.5 or 2 times on your GPU as your CPU. With the 9900K costing about $500 currently, that means you can spend around $1000 to $1500 for your GPU. This opens up options that give you top-tier performance. Now, let’s get to the list…

Launched just recently from AMD, the RX 6950 XT is their most powerful GPU available right now, with a whopping 16GB GDDR6 memory and 5120 Stream Processors. Although the standard GPU comes with a boost clock of 2.31 GHz, the PowerColor Red Devil pushes that up to 2.43 GHz.

If you have any kind of crazy setup, like triple monitors or a 32:9 aspect ratio super ultrawide monitor, this is the GPU for you. It’ll crush any kind of workload you throw at it (thanks to all that VRAM) and will give you a smooth gaming experience at a high resolution like 4K too.

Unfortunately, being the overclocked version of the 6900 XT, efficiency is kind of thrown out the window with this one. In most tests, the 6950 XT often pushed the total usage to over 530 watts. As a result, it shouldn’t come as a surprise that AMD recommends at least an 850W PSU to run this GPU. For this particular unit from PowerColor, that number goes up to a whopping 950W!

Overall, if you’re willing to pay the price, the 6950 XT is an exciting GPU to go for. Many have touted it as an ‘economical’ RTX 3090 alternative. If you’re looking for the best in the current gen from Team Red, this is the one. 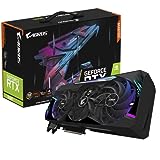 One of the first things you’ll notice about the Aorus GeForce RTX 3080 Master is its small LCD display. This was a crazy trend back in the day, but here the implementation is fairly tasteful and minimal, providing you with performance stats like CPU temperature, VRAM clock, and much more at a quick glance. You can see a live demo of it here.

You might be aware that the RTX 3080 comes in two variants, one with 12GB and the other with 10GB VRAM. This is the 12GB one. It’s powerful and will give you a great gaming and streaming experience. In terms of power consumption, Nvidia recommends a 750W PSU.

When it comes to cooling, it has three fans and something Aorus calls ‘MAX-Covered Cooling.’ This refers to a design where the GPU fans are enlarged and arranged in a stacked configuration in order to increase potential airflow to the heatsink and make it more efficient.

To sum it up, the Aorus GeForce RTX 3080 Master is a great card that includes efficient cooling, cool aesthetics, and powerful processors. If you have the required budget and want a high-end GPU from Team Green, consider this one.

With performance rivaling that of the RTX 3060 Ti, the PowerColor Fighter AMD Radeon RX 6600 XT is an interesting option if you’re looking for the best bang for your buck. Packing 8GB GDDR6 memory and 2048 Stream Processors, it can easily provide 144+ FPS at 1080p in games like CoD: Warzone and Apex Legends.

Unfortunately, if you’re a big fan of raytracing, you might be disappointed here. As you can in this test, performance falls drastically when you enable raytracing with the RX 6600 XT in games like Cyberpunk 2077.

With that in mind, if you’re looking to play games in 1440p or 4K with raytracing on, you might be better off with something like the RTX 3060 Ti or RTX 3070, which perform better in that regard thanks to bandwidth. But if you’re purely gaming in 1080p, this is an excellent option that provides the best cost per frame. If you’re willing to spend a bit more, you can upgrade to a 6650 XT, which I talk about in this article. 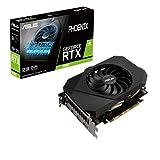 In 2022, wanting to build a small form-factor PC no longer means that you need to make do with lesser performance. The ASUS Phoenix NVIDIA GeForce RTX 3060 V2 stands as proof of that.

Measuring just 6″ by 5″, it still packs 12GB GDDR6 memory and 3548 CUDA cores, which is more than enough juice for a mid-range gaming and streaming PC. According to most users, it lands somewhere between the GTX 1080 Ti and the RTX 2070 Super in terms of performance.

In a nutshell, it’s optimal for those using 1080p 144Hz monitors. It can also handle 1440p, albeit at a lower refresh rate. I wouldn’t recommend it for 4K or 8K gaming.

When working with smaller components like this, you often have to either choose between thermal throttling or high noise generation. Fortunately, in the case of the RTX 3060 V2, that isn’t the case! The axial-tech fan design in combination with the dual ball fan bearings works rather well to keep it cool and silent.

What is Intel Turbo Boost?

On the i9 9900K specs page, you can see that it has an ‘Intel Turbo Boost Technology 2.0 Frequency’ of 5.00 GHz. Simply put, this is a dynamic frequency scaling feature. The CPU will run at base frequency (3.6 GHz for the 9900K) when under light workloads. When handling heavy workloads, Intel Turbo Boost steps in to increase the clock speed to the Max Turbo Frequency, which is 5.0 GHz. There needs to be some thermal headroom available for this to work.

If you’re going to be using an i9 9900K CPU, it makes sense to get a GPU that can take full advantage of it and not leave any performance on the table. There are, of course, certain exceptions where you might want to go for alternative options.

In this article, I’ve tried to cater to most types of gamers out there. I hope you found what you were looking for. Here’s a quick rundown of all the GPUs there were featured.