Being the first desktop Ryzen APU from AMD, the Ryzen 3 2200G holds a special place in the lineup. It packs four cores, four threads, and integrated Vega 8 graphics. All in all, it is capable of giving you a decent playable experience in most games.

Unfortunately, since it lacks SMT (Simultaneous Multithreading), it will definitely struggle if you try to both play games and live stream with it. The solution? Get a dedicated GPU. In this article, you’ll find five of the best options that will let you stream.

Being four years old at this point, the Ryzen 3 2200G is not on-par with the latest processors available today. But it can still put up a decent fight, especially if you pair it with the right GPU. Without further ado, let’s get to the list…

Currently, the RTX 3050 is one of the most budget-friendly ways to get access to the latest Nvidia Ampere architecture. Based on the specs, it can easily take on any AAA title at 1080p Medium to High settings. If you want to see gaming benchmarks, check out this video.

In terms of cooling, it has dual 90mm alternate spinning fans and an extended heatsink. Working in tandem, these components enable air to pass through the GPU and dissipate heat evenly, making it easy to avoid heat throttling and better clock speeds. When it comes to the build quality, it’s fairly decent as with most Gigabyte GPUs, and it has no RGB lighting.

In a nutshell, RTX 3050 is a great mid-range GPU from the RTX 3000 series. If you like the features Nvidia offers and usually game and stream at 1080p, this card will fit your requirements perfectly. 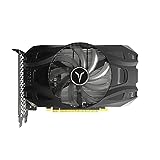 Yeston might not be a brand you’ve heard of, but this unit of the GTX 1050 Ti is definitely worth checking out if you’re after a budget GPU for your Ryzen 3 2200G. It packs a decent power in a small form factor.

It can give you a playable frame rate at 1080p Medium settings in games like Forza Horizon 5, Red Dead Redemption 2, and Elden Ring. On his channel, RandomGamingHD goes more in-depth with the benchmarks.

In terms of cooling, it has a single 90mm fan and an aluminum heat sink. You also get all the required display output ports. All in all, consider this card if you’re either on a tight budget or are looking for a temporary option before you decide to upgrade down the line. 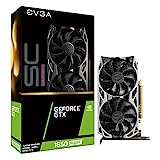 The SC Ultra from EVGA is quite impressive, giving you a higher boost clock from the default 1.72 GHz to 1.75 GHz. Although the performance is impressive out of the box, there’s also room for overclocking using tools like MSI Afterburner or EVGA’s own Precision X1. With dual fans and an all-metal backplate, it is built to last as well.

If you’re building a small form-factor PC with a case like the NZXT H1 V2 or the Cooler Master MasterBox NR200 and need a powerful GPU that will fit without any space issues, PowerColor AMD Radeon RX 6500 XT might be worth looking into.

You’ll notice the ITX form factor when you look at it, but it also packs impressive power inside. It has 4GB GDDR6 memory and 1024 stream processors. In a nutshell, it’ll give you a steady 144 FPS at 1080p in most games if you’re willing to optimize the settings.

All in all, the PowerColor AMD Radeon RX 6500 XT is a decent GPU. Thanks to the ITX form factor, it’s especially suitable for small-form-factor gaming/streaming PCs.

It’s often hard to find all-white GPUs that match your setup theme, especially ones that are in the mid-range segment. Fortunately, the Hellhound Spectral RX 6650 XT from PowerColor fulfills that requirement.

As you might notice from the spec sheet, it goes directly against Nvidia’s RTX 3060 Ti, with 8GB GDDR6 RAM and 2048 stream processors. It performs similarly to the RTX 3060 Ti too. So, it’s perfect for high refresh rate 1080p and even some 1440p gaming.

Besides the all-white body, it also has vibrant RGB lights and transparent fan blades too, which adds to the overall aesthetic. Everything considered, if you want a good-looking GPU for your white-themed PC without sacrificing on performance, put this one on your list.

In the above list, you might’ve noticed that AMD GPUs have Stream Processors whereas Nvidia GPUs have CUDA Cores. So, what’s the difference? To be honest, both of these terms are just fancy titles for parallel processors and a set of operational rules.

Both of these, Stream Processors and CUDA Cores, differ only in the underlying architecture which both AMD and Nvidia have developed in their own ways. If you want to read more about this topic, check out this post by CGDirector.

Are There Benefits to Using AMD GPU With AMD CPU?

Since you’re using a Ryzen CPU for your gaming PC, you might be wondering if there are any extra benefits for going with an AMD GPU as well. Although there are some benefits, like Smart Access Memory (SAM) and open-source drivers on Linux, in the end, it’s better to just go with the GPU that fits your requirements, regardless of whether it comes from Team Red or Team Green.

Long story short, although the Ryzen 3 2200G is capable of running most games at decent settings and resolution, you’ll be better off with a dedicated GPU if you want a smooth gaming and streaming experience.

All the GPUs I discussed in this article largely fall within the segment of the 2200G and are viable choices for a gaming/streaming PC. I hope this list helped you move ahead with your buying decision. Here’s a quick rundown of all the GPUs that were featured: