Twitch streaming is quickly gaining popularity in 2022, and it’s a great revenue source for streamers who broadcast live games, interviews, and commentary. One important factor to remember, regardless of content type and quality, is the network. To keep lagging, buffering, and random connection drops at bay, you need a top-notch router for your system.

In this full guide, I’ll review five of the best ones you can get in 2022. Whether you have an all-white setup and need a router that fits in or you’re looking for the highest gigabit speeds for your 4K stream, this list has you covered.

Purchasing the right Twitch streaming router for yourself doesn’t need to be a lengthy and tedious task. However, with that being said, not every router out there is suitable for a live streaming setup. What you need to do is keep your requirements in mind and follow some buying guidelines.

To make things easier for a non-technical buyer, I’ve listed the top three features that you should prioritize to find the best router possible:

MU-MIMO stands for multi-user, multiple-input, and multiple-output. It allows the router to get smooth, reliable, and consistent coverage with every single device on the network.

Besides guaranteeing a smooth user experience, it also ensures that your router can easily accommodate multiple devices without any major hiccups or speed decreases. This can be useful when you’re multitasking with several devices or have your friends over.

Beamforming is a technology that directs strong signals at your devices. You can imagine how a sniper points at a particular target standing at a distance. With Beamforming, your router targets your device similarly to get the best speed possible.

Although the broadcast antenna won’t actually move to point at your device magically, the concept still stays the same. So, if you’re using your PC for streaming, this means that you’ll get specialized and powerful coverage rather than relying on a blanket and even signal.

Single-band routers are unsuitable for streaming because they only support the 2.4GHz spectrum, thus only allowing for slower speeds. Dual-band routers, on the other hand, support both the 5GHz and 2.4GHz spectrums. This enables you to access higher speeds.

Tri-band routers are cool too, but they generally tend to cost a premium and can be overkill for just live streaming purposes. So, overall, dual-band routers are the sweet spot you should go for, both in terms of price and performance.

Of course, besides these three features, there are also some other ones to consider: brand, build quality, aesthetics, and more. We’ll discuss that further in each review. Now that you know what you need to look out for in the perfect router, let’s look at the top five ones for Twitch streaming in 2022…

Before we get into specific categories of routers, let’s talk about the best all-round one. The  Netgear Nighthawk Pro Gaming hits the perfect balance between price, performance, aesthetics, and build quality.

First of all, it’s powered by a quad-core beast chipset and has a maximum speed of over 5 GBPS. This is more than enough for a live streamer and general gamer, and will all but eliminate network jitters and lags.

Plus, it also includes VPN (Virtual Private Network) support, which makes Internet security and securing your identity much easier and more straightforward. There’s also Dynamic QoS (Quality of Service) to be excited about. Overall, this ensures a stable and reliable network.

The Nighthawk Pro Gaming doesn’t fall back in terms of looks either. The aggressive design combined with the minimal red accents makes this router fully suitable for an ultimate gaming and streaming setup. Unlike most routers which feature a bland and professional design, this one fully embraces the gamer aesthetic. So, definitely keep this one in mind! 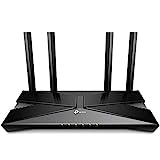 If you’re on a budget and want a simple yet advanced router for Twitch streaming, the  TP-Link Archer AX10 might be right up your alley. Coming in much under $100, the AX10 packs a lot of value for the money: up to 4 GBPS speed, four LAN ports, WiFi 6 standard, Alexa voice control, Beamforming, MU-MIMO, and so much more.

Although it lacks some features found in high-end routers like USB ports and low-ping utilities, it’s still a great router overall and perfectly suitable for gaming and live streaming. Plus, it packs all of that technical goodness in a relatively sleek and elegant outer shell.

As I said before, keep this one in mind if you’re on a tight budget but want to broadcast a crystal-clear and lively stream for your audience. 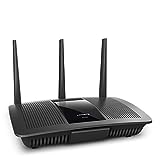 Another great router for Twitch streaming is the Linksys EA7500 Max-Stream. With a variety of WAN, LAN, and USB ports, MU-MIMO, and also smart app support, it provides great value for money.

With dual-band WiFi 6, this router can handle speeds of up to 600 MBPS in the 2.4GHz spectrum and 1300 MBPS in the 5GHz spectrum. While not as impressive as some other options on this list, like the Netgear Nighthawk Pro Gaming and the TP-Link Archer AX10, it’s still more than sufficient for live streaming, gaming, and general everyday use.

One special feature of the EA7500 Max-Stream is the app that it comes bundled with, called Smart WiFi. With this intuitive and user-friendly app, you can easily get real-time info about your WiFi network, send new users your password, prioritize devices that require the highest speeds, and set parental controls. Everything considered, it’s a great value for money router. 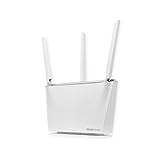 Although routers generally aren’t the centerpiece of any setup and don’t really stand out, if you have an all-white battlestation and an eye for detail, you might need to get a router that matches too. In that case, the ASUS RT-AX68U is a solid option, not only in terms of aesthetics but also networking capability and features.

The RT-AX68U isn’t devoid of smart features either: it comes with the ASUS Router app and you can also use it with Alexa for quick hands-free control. With a 1.8GHz dual-core processor, it’s not as powerful as some other options on this list but still more than enough for live streaming. Besides the variety of LAN, WAN, and USB ports, it also comes with a WPS button, reset button, and power switch.

The one feature that sets this router apart from the pack is the AiMesh technology. Developed by ASUS, it connects multiple ASUS routers to create a unified WiFi network. If your home or workspace has many empty WiFi spots, you can use an older ASUS router model to expand your network and cover those blindspots, and control them all centrally from your primary router.

In 2022, 720p or even 1080p resolution streams don’t cut it for some viewers anymore. They like the clarity and vividness of a 4K60 stream. If that’s your goal, the D-Link Exo might be a good router to look into. Not only is it a great device overall, but it’s specially designed with the goal of 4K streaming and gaming in mind.

This router is loaded with many exciting smart features: MU-MIMO, Beamforming, and even D-Link’s special QoS tech for device prioritization. With it, you can direct a significant chunk of your network bandwidth to a particular device. Considering your use case, you’d do best to use that feature for your streaming PC.

In terms of specs, the D-Link Exo features a dual-core CPU, 128MB of flash memory, and 512MB of RAM. When it comes to speed, with dual-band WiFi 6, it manages speeds of up to 800 MBPS in the 2.4GHz spectrum and 1733 MBPS in the 5GHz one. It also offers ample connectivity, with four LAN ports and two USB ports. Overall, it’s a perfect router for 4K streaming.

Will the Router Ensure Data Security?

Data and network security, especially in 2022, is of the utmost importance. Being a public live streamer, you’re bound to come across hackers or programmers with malicious intent at some point. Consequently, it’s important to buy a router that has at least a few security measures built in.

Almost all routers are equipped with some basic security protocols. However, if you want the best and most secure router, you might want to look into those that have multiple layers of protection: Virtual Private Network features, WPA access, and a custom firewall.

From the above list, the best routers in terms of data security are the ​​Netgear Nighthawk Pro Gaming and the Linksys EA7500 Max-Stream.

Why are Ethernet Ports Important on a Router?

Although WiFi is awesome for entertainment and general use, nothing matches the speed, low latency, and overall reliability of a good ol’ wired Ethernet connection.

Why is this? The truth is, WiFi can be disturbed easily by many things: the layout of furniture and walls in your home or workplace, network interference from other electrical gadgets, and even nearby WiFi networks. All of this equals to it being generally slower and less reliable compared to Ethernet.

Does this stuff matter if you’re just watching videos, browsing your tracklist, or surfing the web? Not really. However, for gaming and live streaming, this should be a priority if you want to keep lagging, buffering, and random connection drops at bay. Especially in competitive online games like CSGO and Overwatch, where even a millisecond can make a huge difference.

Of course, you’re not going to be plugging in an Ethernet cable into your phone or tablet. So, for the sake of your PC and smooth networking, make sure the router you buy does come with at least one Ethernet port.

Before buying a router for your exciting new Twitch streaming setup, it’s important to consider the three factors mentioned in the Before You Buy section: MU-MIMO, Beamforming, and dual-band. I’ve added a router suitable for each type of use-case on this list.

For those who are inclined to spend a premium and want the best of the best, there’s the Netgear Nighthawk Pro Gaming. On the other hand, for those who are on a budget, the TP-Link Archer AX10 is the right choice; and so on. Here are all the routers we talked about in this article: