When it comes to live streaming one of the most important aspects of a good stream is having good audio. Having a mixer that can handle your audio sources such as your microphone, music, sound effects and more can massively increase your production value. The Maonocaster E2 does all of this.

In this article, we are going to take a look at the new Maonocaster E2 Audio Interface built for streamers and podcasters. One of the most popular mixers for streamers is the GoXLR however it comes with a much higher price tag.

The Maonocaster E2 podcaster comes in at a price tag of $169.99 and also comes with a microphone whereas the GoXLR comes in at approximately $480 and does not come with a microphone. The Maono is a budget friendly competitor and is great for creators on a budget. Let’s jump in and see how good it is.

What Comes In The Box

One of the best things about this kit is that it comes with everything you need for your audio setup as a streamer. You do not need to buy a separate mixer and microphone.

The Box comes with:

This is everything you need for a good audio setup as a streamer. The only problem is the device requires to be connected to your computer via a USB Type C cable. The USB A to C that comes with the device is needed to power it on. You will need to purchase a Type C cable separately.

First up let’s take a look at the build quality of the equipment. The mixer itself is made of a sturdy plastic material and feels very solid. There is essentially no flex in the device at all.

The sliders on the device move smoothly and have some resistance. I have used other audio devices where the sliders would be flimsy and have little resistance when sliding, making it hard to get precise audio volumes.

The Knobs on the device are also of great quality and click into position at the 12 o’clock position.

The rubber buttons to which you can add custom sounds are responsive about 95% of the time when pushed. It takes a good push to activate the key. After a while, you get used to it and will rarely have a problem with the keys.

Overall the device feels like a premium product and is much better quality than I expected for a $169.99 device especially as it also comes with a microphone.

In the E2 the Pre Amps are great and support up to 60 Db of gain. This means that essentially any microphone will work with the device including the Shure SM7B which requires a lot of gain.

The microphone that comes with the Maonocaster E2 also sounds great when plugged into the preamp with 48V Phantom power activated.

The Maonocaster E2 does this extremely well with the live audio levels being shown directly on the device for each of your audio sources.

Next up we have to talk about the PM320 Microphone bundled with this set. While the microphone is not the greatest in the world it holds its own for microphones in this price range.

If you are just getting started with streaming this microphone is more than good enough to get your stream started on a budget.

The microphone is a cardioid microphone meaning you will have to speak directly into the face of the microphone (The side with the Maono logo).

One of the best features I found useful with the E2 as a streamer was the ability to connect to it via Bluetooth with your phone. This can be great for multiple different scenarios.

One I found it useful for was playing music from my phone directly to my stream and having control over the levels on the E2 device.

The second was the ability to have people call into your live stream. There may be times on your stream or podcast where you want to take calls from viewers. They can call in and you will be able to send their voice to the E2 via bluetooth so your stream can hear them clearly.

You can turn Bluetooth on and off on the device simply by holding down the bluetooth button for 2 seconds.

Voice Effects On The E2

The E2 has a range of voice effects available on the device. By using these you can make your voice sound slightly or vastly different.

Auto-Tune – This allows you to change your voice to be on a specific note. There is a range of notes displayed on the device which a user can choose from.

Pitch – This allows you to adjust the pitch of your voice up or down making you sound very deep or very squeeky.

These can be fun features to use on stream if you want to troll some people by changing the sound of your voice.

You may have used a de-noise filter in your streaming program or something like Nvidia broadcast. However, the E2 has this built into the mixer directly.

If you stream from a noisy environment or have a fan or loud pc then I would recommend enabling this feature. It works well to remove most of the background noise.

Every streamer loves to have a soundboard on their stream. If something funny, bad, insane happens you can have a key programmed on your soundboard to play a relevant sound.

The soundboard on the E2 has 11 programmable buttons to which you can record audio. The main problem with this is you have to manually record the audio to these buttons. Unfortunately the E2 does not come with a computer software allowing you to program the buttons on your computer.

The way I recorded sounds to my buttons was by loading up myinstants.com on my phone and connecting it to the E2 via bluetooth. I then set the key to record mode and played the sound on my phone.

That sound is then saved to the E2 and I can play it back at any time. While this isn’t hard to do it would be nice to see the E2 have dedicated software.

Inputs and Outputs On The E2

The main downside of this device is the fact it only has one XLR input. While you can connect a microphone through the aux port there is only a slot for one XLR microphone.

Should You Buy The E2 As A Streamer? 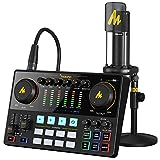 Ultimately the E2 is a great budget mixer and soundboard for streamers. If you are on a budget and want an all in one audio setup that sounds pretty good right out of the box this is a great option. There is a couple of downsides compared to something like a GoXLR but your saving a ton of money.

One last thing to mention is the fact you cannot route digital audio sources through the E2. While you can hear your computer’s audio, you cannot split the sources such as Discord, your game, music etc. Depending on your situation this may be necessary.

Otherwise, we would recommend picking one up from Maono if you are looking for an audio setup on a budget.