Overwatch 2 has just landed and people are loving the new version of the game. However, some Playstation players want to use a mouse and Keyboard on their console. In this article, we are going to take a look at 2 different ways you can use mouse & keyboard in Overwatch 2 for Playstation.

How To Use A Mouse & Keyboard On Overwatch 2 Playstation

There are two ways to use a mouse and keyboard in Overwatch 2 on Playstation. You can either use a simple workaround by joining a PC player’s lobby or you can use a third-party adapter.

Some players have reported that the mouse and keyboard will work for them on Playstation when they join a PC Players game. Follow the steps below:

While doing this you will be able to use a mouse and keyboard. However, as soon as you leave your PC player’s lobby, it will stop working.

Some players have reported that they are experiencing issues with this method. They can get the Mouse & Keyboard to work however, there is an ‘invisible wall’ that doesn’t allow the player to turn more than 180 degrees.

How To Use An Adapter To Use Mouse & Keyboard

The above method isn’t a great option, especially if you want to play with friends who are also playing on a console. The next best option is to use an adapter that allows you to map your keyboard and mouse to the Playstation controls. 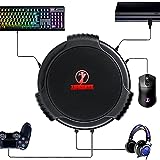 Using this device allows you to connect your keyboard and mouse to the device which then connects to the console. This allows the device to translate the keyboard inputs to PlayStation controls. Your console still thinks you are using a controller while in actual fact you are using a mouse and keyboard.

This is currently the best method to use Mouse and Keyboard on the console for Overwatch 2.

No, currently Overwatch 2 does not natively support Mouse and Keyboard on consoles. As we previously mentioned you will have to use a workaround or a third-party adapter to use them. Hopefully, in the future, a patch will be released giving full mouse and keyboard support as many games are now offering this on the console.

There are speculations that this may be coming as the game does allow you to use a keyboard when in a PC player’s lobby. This could however just be a glitch from the console ports.

Unfortunately, there isn’t full mouse and keyboard support yet but one of these methods will allow you to use them. While it isn’t perfect, it is the best option we have at the minute.