As a gamer and live streamer, your GPU is the most significant component in your PC. It powers your game and renders your stream. Thus, using the wrong GPU can not only ruin your gaming experience but also drive away viewers. Nobody likes random framerate drops, BSODs, and ghosting issues.

With pricing and availability all over the place, I’ve done the legwork for you and compiled seven of the best GPUs for streamers in 2022. Whether you’re looking for a budget 1080p 60 FPS gaming GPU or one that can power a triple-monitor 4K battlestation, I’ve got some great options for you.

AMD VS. Nvidia: Which is Better for Streamers?

When looking for a graphics card, you will have to choose between two major manufacturers: AMD or Nvidia. This is a choice that many people struggle with, not only in terms of price but also performance and user-friendly features. However, as a streamer, the most important factor you need to consider is the encoder.

Besides having a big hand in your stream quality, the encoder also determines where your system resources are allocated, making it a significant factor in overall performance. Using a good encoder will make your PC run more efficiently and give you the power required for the best possible stream. So, let’s check out the encoders that Nvidia and AMD offer:

Currently, Nvidia is at the top of the list for most streamers. In addition with a bunch of useful extra features, like virtual green screens and AI-enabled noise canceling, their encoder is creator-friendly too.

Almost all of their current active GPUs are loaded with a dedicated chip with the sole purpose of video encoding. This not only means that the overall quality is better but your PC also performs better because no system resources are taken away from gaming when rendering video.

AMD generally gets a bad rap for their encoder in the streaming community, however, it offers competitive features and does have a charm of its own too.

In terms of resolution, it offers 360p, 480p, 720p and 1080p streaming at up to 60 FPS, similar to Nvidia. However, in addition to that, it also offers you the ability to stream on a custom server along with Twitch and YouTube.

Overall, there is no right or wrong answer here. Although Nvidia offers some fun extra features, AMD’s offering isn’t bad either. It largely depends on your own preferences, stream type, and budget level. So, without further ado, let’s dive into the list of top seven best GPUs for streamers in 2022…

At first glance, it’s easy to dismiss the RTX 3070 Ti as just a slight upgrade on the original RTX 3070. However, it offers a unique value proposition over the 3070 and holds many other surprises too. With this GPU, you’re also getting access to the high-speed GDDR6X memory used by the RTX 3080 and 3090.

The upgraded memory type, when combined with the faster clock speed, provides a significant 15% boost. How does this translate to gaming? The 3070 Ti is able to maintain over 144 FPS at 1440p Max settings on AAA titles like Far Cry 5, Metro Exodus, and The Witcher 3 without breaking a sweat. Plus, it easily manages 60 FPS in 4K too.

In terms of design, the Trinity OC from Zotac is one of the best ones you can get currently. It has sleek curves and minimal RGB. The triple-fan configuration will also keep the temps in control if you overclock it. In summary, it’s just the best all round graphics card you can get in 2022. 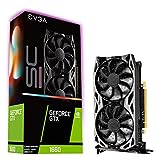 If you’re on a tight budget and want a decent GPU, the GTX 1660 SC Ultra is a solid bet. Although from the previous gen, it still has great specs for gaming and streaming.

With 6GB of GDDR5 memory, you’ll be able to game without any hiccups. In games like Apex Legends, Doom Eternal, and GTA V, this card is able to reach the 100 FPS mark easily at 1080p on Ultra settings. So, it’s an optimal card if you own a 120Hz monitor or something close to it.

Overall, the GTX 1660 SC Ultra is more than just a slight overclock on the original GPU. It offers a great value proposition for those wanting to get a gaming and streaming setup running on a budget. If you’re in the market for something like that, definitely keep this card in mind!

For the first entry by AMD on this list, I’ve chosen the RX 6600 XT. While it’s targeted mainly at eSports players, for games that don’t carry much visual fidelity but require an extra high framerate. However, it holds an impressive value proposition for general users as well.

In a confident move, AMD has themselves published the benchmarks on the product page for the RX 6600 XT. In story-driven games like Assassin’s Creed Valhalla and Resident Evil Village, the card manages to go over 100 FPS at 1080p Max settings. Whereas, with fast-paced competitive games like Rainbow Six Siege and Valorant, it manages to go well over 200 FPS easily.

Plus, MSI hasn’t wasted any resources on fancy RGB lighting or aggressive curves on this GPU, making it a solid bang for your buck. It also offers the RTX 3060 from Nvidia a run for its money, which we’ll discuss next. All in all, the RX 6600 XT is a great value-focused GPU.

If you’re an Nvidia fan and want a GPU for high-FPS 1080p 144Hz gaming, the RTX 3060 is your best bet. It not only provides an impressive generational improvement over the 2060, but is overall a great card as well.

It delivers well over 140 FPS in games like Battlefield V, Cyberpunk 2077, and Horizon Zero Dawn at 1080p Max settings. Keeping these numbers in mind, you can easily manage 1440p gaming as well, albeit at a lower framerate of around 60 to 100 FPS.

With over 12GB of GDDR6 memory, which is even more than the 3060 Ti, along with 3584 CUDA cores and a boost clock of 1.78 GHz, that level of performance is not really a surprise. All in all, while this card does suffer from availability issues, don’t think long before snagging one up if you find it in stock. It’s the very best one for 1080p gaming you can buy in 2022.

For those in the market for a high-end GPU from AMD, there aren’t many better options than the RX 6800 XT. Although this card is more than capable of 1080p gaming, where it really shines is at 1440p. It easily delivers over 144 FPS in games like Control, Assassin’s Creed Odyssey, and Forza Horizon 5 at 1440p Max settings.

You might argue that getting a competitive Nvidia GPU, like the 3080 or 3080Ti, would give you access to DLSS and better ray tracing performance. While that’s true, AMD’S FidelityFX Super Resolution technology also offers similar features and is quickly becoming popular among game developers too.

The bottom line is, if you’re looking for a high-end AMD GPU that can smoothly play your favorite games at 1440p, your search ends with the RX 6800 XT.

For those who have a big budget and want a GPU that can power a 4K gaming battlestation, the RTX 3080 Ti might be the right choice. With 12GB or GDDR6X memory and over 10K CUDA cores, it delivers solid performance. It can consistently maintain around 120 to 140 FPS in AAA titles like Watch Dogs Legion, RDR 2, and Immortals Fenyx Rising.

The FTW3 from EVGA ensures good performance as well. It has a triple-fan configuration in addition with nine iCX3 thermal sensors. This offers high-performance cooling for such a power-hungry card, although it could get loud during extreme workloads. It also looks cool, with an all-metal backplate and an ARGB LED logo.

Everything considered, the EVGA RTX 3080 Ti FTW3 is a great 4K-capable graphics card. It’ll easily power up any new AAA title at 4K on high settings. The price is relatively steep, but for those who can afford it, it offers a solid value proposition.

Finally, if you have no budget worries and just want the best that money can buy in 2022, the RTX 3090 Founders Edition from Nvidia might be right up your alley. Coming in at over $2500, it also offers similarly mind-boggling features. Let’s talk more about it.

First comes the monstrous 24GB of GDDR6X memory. Needless to say, you won’t be having any trouble playing games in 4K or even 8K on it. Although if the performance gains are worth the price increase or not stays a hot topic, for those who can afford it, this is still a solid choice.

You might be thinking that this level of power is overkill with today’s gaming market. However, this GPU was built with the future in mind. Down the line, when games become more complex and vibrant, that’s when this GPU will really shine. Overall, get this GPU if you have a big budget and want to stay ahead of the gaming crowd for the next few years.

What’s the Difference Between Stream Processors and CUDA Cores?

While looking at the specs table for each GPU on this list, you might’ve noticed that Nvidia GPUs have “CUDA Cores” whereas AMD GPUs have “Stream Processors.” What’s the difference between the two, and should they even be compared to each other?

The truth is,both are equally capable and serve the same underlying purpose. However, they’re built on different architectures and thus operate in unique ways. Comparing them outright requires certain technical know-how and that’s an easy rabbit hole to fall into.

Instead, analyzing use case relevant data is way more useful. Official or even third-party gaming and streaming benchmarks always help. They give you a look into exactly how much FPS and what kind of render times you may expect out of that component. This makes it much simpler to compare two different GPUs from AMD and Nvidia.

Is Ray Tracing Important for Streamers?

Ray tracing has been all the craze in the gaming community over the last few years. A realistic lighting technology that was a novelty available to only elite users became accessible to a lot more people. Although not all games support it, those that do look over 10 times better with it, but is it an essential feature that a live streamer needs?

First, let’s discuss the cost. Ray tracing capable cards are mostly more expensive than regular ones. However, there’s another cost you need to consider as well: performance. Although it varies from game to game, enabling ray tracing can generally bring a double-digit performance penalty, even with tools like DLSS enabled.

Overall, while it’s a compelling technology, it’s not an essential feature for a live streamer specially, especially those centered around fast-paced competitive games. Even if the premium cost is acceptable, the performance hit can be a bit hard to swallow.

Unlike other components in your setup like monitor and cabinet, choosing a GPU itself is a fairly straightforward task since there are only two major manufacturers. However, once you dive into brands and sub-brands, it’s a whole different game and things can get complicated very fast. This list breaks it all down for the average user: