The Ryzen 3 3200G is a four-core and four-thread CPU from AMD with a boost clock of 4.0 GHz. Although this might not sound that amazing, what sets it apart from the pack is that it has a Radeon Vega iGPU built-in. This gives it the ability to display frames, which most CPUs can’t do.

However, the iGPU is fairly limited and won’t be able to run the latest AAA titles with high settings at a smooth frame rate. Add on top of that real-time video encoding for your stream and you’ll be looking at a collection of pictures rather than a playable game.

So, installing a dedicated GPU can help a lot and make your gaming experience significantly better. It’ll also quicken your video rendering times and make for a much smoother stream overall.

Since the 3200G is a budget-level CPU, that probably means you don’t want to spend a fortune on your GPU. In line with that, here are some technical tips to keep that in mind before making a final buying decision:

To squeeze the highest possible framerate out of your GPU, you’ll definitely need quite a bit of power under the hood. This is determined by a few factors: VRAM, cores, and clock speed. Although these vary based on the underlying computing architecture, generally the higher, the better.

Even though it’s easy to lean towards AMD in this case, Nvidia has some great budget offerings in their line-up too. When it comes to streaming, both offer great utilities in the form of Nvidia ShadowPlay and AMD ReLive. So, it just boils down to individual preference. There’s no wrong choice to be made here.

Of course, with more processing power comes a higher energy requirement. Once you’ve decided on the manufacturer and other metrics, you need to make sure that you have an adequate PSU to power your GPU.

In each review in this article, I’ve listed the recommended PSU from the manufacturer itself, so you can check to make sure there are no issues down the line.

Now that you’ve brushed up on your GPU knowledge, let’s dive into the list…

One of the best GPUs you can pair with the 3200G is the GTX 1660 from Nvidia, when it comes to price as well as performance. Both of them combined will tear through all AAA titles with ease, giving you an average framerate of around 60-75 at 1080p high settings easily. If you play fast-paced FPS games like Fortnite and PUBG, expect at least 90-100 FPS.

The problem with going any lower than this is that you’ll end up bottlenecking your CPU; fortunately, in this case, you’re getting the most out of both components, which is ultimately what every gamer and streamer wants.

I’ve picked this specific model from Zotac keeping a lot of factors in mind, like build quality, aesthetics, and cooling capacity. It doesn’t go overboard in any aspects and stays consistent throughout with the form factor and design language.

If you’re on a budget, the RX 550 might do the trick for you. With 4GB of GDDR5 RAM and only 512 stream processors, it’s not much to talk about. Many users even compare the performance this card offers to APUs like the 3400G. However, it should be sufficient for some basic gaming and streaming.

For AAA titles like Witcher 3, RDR2, and Cyberpunk 2077, you can expect around 30FPS without sacrificing quality. For lightweight games like Overwatch and Valorant, you’ll easily get around 60 to 75 frames per second.

This model from MaxSun is also simplistic in the best possible way. It has a single 9cm fan and silver-plated PCB for efficient cooling. It drops fancy features like RGB to keep the price as low as possible. All in all, go for this card if the Radeon Vega iGPU on the 3200G is not cutting it for you and you’re looking for a boost in performance. 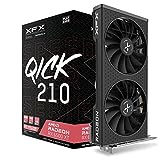 This category is for the GPU that’ll give you the best bang for your buck, and in that regard, the RX 6500XT excels above many others. It is the updated version of the last-gen RX 5500 XT, which was also targeted toward budget 1080p gamers

Although the 4GB GDDR6 memory is rather limited, it has a great base and boost clock speed as noted in the spec list above. Thanks to that, it can easily provide a 60FPS playable experience in games like CoD: MW, Forza Horizon 4, and Far Cry 6 with decent graphics settings. Of course, for e-sports titles, you can easily get over 144 FPS too.

This Speedster model from XFX is designed fairly well too. It has an elegant and simple design, no RGB, and dual fans for efficient cooling. Overall, at the current price, this is a good value option to go for.

If you’re looking for a fairly high-end option from AMD without spending a fortune on a 6900XT or a 6700XT, you might want to check out the 6600. With 8GB GDDR6 memory paired with 1792 stream processors, you have plenty of headroom to play all kinds of graphically-heavy games with a high resolution on it.

Of course, with that kind of power, there’s also a lot of heat generated, and for that purpose, Gigabyte has added a Windforce 3X cooling system with alternate spinning fans on it. This will keep it cool and quiet even when under a heavy workload.

As you can see, it looks pretty cool overall and has some great user ratings too. Unfortunately, if you’re doing a small form-factor build, this might not fit in. In most other aspects though, this card is awesome.

For Team Green players who own a Ryzen 3 3200G, I’d recommend you go for a 2060 card if you want a high-end option but don’t need to break the bank at the same time. With 6GB GDDR6 memory and 1920 CUDA Cores, it’ll give you a smooth gaming experience. Plus, being an RTX card, it’s also capable of raytracing!

This particular model from ASUS only furthers the technical wholesomeness. First of all, you’ll notice that it has a fairly good cooling capacity with dual wing-blade fans, and the overall design language prioritizes performance over aesthetics.

Another good feature of this GPU is the I/O port. With DisplayPort 1.4, HDMI 2.0, and DVI, it can support up to four monitors. This is great for streamers because as you might know from experience, one monitor rarely cuts it. Everything considered, go for this card if you’re willing to spend a premium and get good performance in return.

Can the Ryzen 3 3200G Display Frames Without GPU?

Yes, it can display frames since it has a Radeon Vega 8 integrated GPU. Even packing both a CPU and GPU, thanks to the 14nm process and smart power-saving features, it guzzles down a relatively low power. So, it can easily be handled by the included Wraith Stealth cooler.

However, if you’ve used Intel UHD graphics in the past, it’s nothing to get excited about as a gamer. As I said before, it’s only suitable for work and light gaming. For a high framerate, you’ll need a dedicated GPU.

You can get third-party benchmarks from YouTube and many other sites. However, in general, it’s only suitable for light-weight FPS games like CS:GO and Valorant when running at 1080p high settings. It sits somewhere between the GeForce 940MX or Radeon Pro 450 and GeForce MX150 or Radeon Pro 555.

You can squeeze more frames by running the game at 720p with medium settings, but that of course lowers the visual clarity too. Plus, if you want to stream or record in real-time, that’ll add even more processing load which will push the framerate further down. So, overall, it’s just better to get a dedicated GPU to begin with.

Can the iGPU and Dedicated GPU Perform Together?

Yes! This is known as AMD Radeon Dual Graphics. Of course, it’s exclusive to the AMD platform and only works with AMD APUs along with select AMD discrete GPUs. If you’re able to use it, it’s a great way to use all the processing power available without leaving anything on the table. You can get more info about it on AMD’s official website.

If you’re looking to give your Ryzen 3 3200G iGPU a boost, there you go! These are the best ones you can get out there for this exact use case. Keep in mind that other components like RAM and SSD are also important for improving overall performance. Here’s a summary of the GPUs discussed in this article: