If you’ve ever wanted to play a retro game or any other game that you don’t have the machine or device for, chances are you’ve heard of an emulator before. It’s not a bad idea to use an emulator in certain situations. But if you’re a streamer, you might be wondering — can you even use emulators on Twitch?

The usage of emulators can be divisive among many communities for many reasons. To help answer some of these burning questions, we asked passionate retro gamer and variety Twitch streamer AlexIsPlaying for his insight.

The Merriam-Webster dictionary describes an emulator as hardware or software that permits programs written for one computer to be run on another computer.

Put simply, emulators can allow you to play games from one system on another system (i.e. the computer that you own).

AlexIsPlaying also states that “Emulators are a product of reverse engineering an entire CPU and GPU and sometimes more for a console. Doing that can take years upon years to figure out, especially for things not well documented. As such, certain consoles just never got good emulation like the Original Xbox or took 20+ years like Sega Saturn due to its complexity.” Additionally, he says that demand/interest from the community who knows how to program can play a big role in whether a system has an emulator out there.

There are many reasons why someone might want to use an emulator, such as wanting to play a retro game on a discontinued system or wanting to play a game that was released exclusively on a console you do not own. Many people also use emulators for speedrunning, although there are rules around which emulators are “legal” for your speedrun attempt to count towards the leaderboards.

For example, if you were to visit Speedrun.com, click on EMU, and then View Rules, you’d see something like the below:

The screenshot above shows the rules for speedrunning Super Mario 64, which clearly state which emulators are “legal” if you want your run to count.

What are the Different Types of Emulators?

There are many different types of emulators, but we can break them down into two main categories: hardware and software.

Hardware emulators replicate the original system hardware, so you would essentially be buying an “imitation” of something else. They emulate the hardware so you can use your original cartridges. Analogue is a company that creates hardware emulators using FPGA or Field Programmable Gate Arrays. The screengrabs below are from the Analogue website.

Analogue is one of the most prestigious hardware or analog emulators around. However, there are also many other types of hardware emulators, such as ODEs (optical drive emulators). ODEs allow you to replace the CD-drive in your console with an SD card slot so you can play your backups/ISOs/BIN+Cues or whatever format is allowed.

Examples of other brands of hardware emulators include (but are not limited to) the Retron 5, which is a popular 5-in-1 device, and the SupaBoy, a pocket/portable SNES emulator. 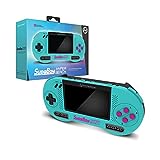 The downfall to using hardware emulators is that they can be fairly hit or miss due to the complex process of emulation. Analogue is so highly regarded because it does appear to have the most consistent and reliable performance. Another problem you may run into if you want to stream from hardware emulators is how to set it all up for streaming. Will the equipment need special cables and connectors? Will it all work with your capture card? And so on.

It’s worth mentioning that there are so many other things out there that you can do or use, such as RetroArch and RetroPie.

Software emulators are what PCs and cheaper emulation machines use. Rather than reverse engineering hardware and trying to make it all work, some programmers may prefer to go the software route. There are emulators for retro devices and Android devices. Alex states that the Nintendo Switch also has one called Yuzu, but its performance is still hit-or-miss in many situations, despite the many great strides its made in the past couple of years.

If you’re looking for emulators for recent consoles, unfortunately Alex states that “The latest emulators that exist for consoles are 360/PS3 era: RPCS3 (PS3) and Xenia (360). PS3 emulation is much further along but with massive flaws still. 360 is very very rough.” Most emulation websites, like RPCS3, has a list that contains compatible games and their playability on the emulator.

Are Emulators Allowed on Twitch?

Yes! However, it’s worth mentioning that cheating using an emulator is a bannable offense on Twitch. For example, using an Android emulator to play a multiplayer/competitive mobile game on your computer is considered cheating. If you would like to stream retro games or your speedrunning attempts, or if you want to use an emulator for any other reasons, you may be happy to know that there’s no rule against them on the platform.

However, this does go into the next question:

Are You Allowed to Play Pirated Games on Twitch?

It’s most recommended to use emulators to play games that you already own a copy of. This includes games that you owned on the original hardware or paid for a long time ago — even if your cartridge or CD is no longer functional. This is important, especially if you are streaming on Twitch, especially because the platform has a zero tolerance policy for piracy. If you get reported or if Twitch finds out that you’re playing a pirated game, you can get banned from the platform.

No, emulators are technically legal, as long as they create their own code or hardware. A good example to look at is Bleem! vs. Sony. Bleem was an aggressively marketed PlayStation emulator released in 1999. It allowed users to play PlayStation 1 games on their PC or Sega Dreamcast (their Dreamcast version was conveniently called the Bleemcast!). Sony started coming after them for various reasons — violations of copyright, unfair competition, and patent infringement. Sony never won a lawsuit, but Bleem! was driven out of business anyway due to the legal costs and disruption.

What are the Best Emulators?

The “best” emulator is quite subjective — it all depends on which console we’re talking about. Here’s what Alex has to say:

Emulators allow gamers and streamers to enjoy content that would’ve otherwise been impossible to play. And, as long as you’re playing a game that you legally own a copy of, you’re in the clear to stream using an emulator! It’s unfortunate that the latest consoles don’t have any emulators yet, but who knows — maybe there will be in the future.

Read More from Get on Stream:

Is Twitch Streaming a Good Career? [What You Need To Know]

Who Is Nickmercs Wife? – [Full Bio]