Released by TC Helicon in 2018, the GoXLR quickly skyrocketed in popularity and took the streaming world by storm. In addition to being a great mixer, it had a user-friendly desktop app, plenty of sound effects, and RGB lights! Back then, if you wanted a simple and professional way to manage your live audio, you had to pay the hefty $500 price tag.

Fortunately, in 2022 we have more affordable alternatives available in the market by many other brands which serve the same purpose as the GoXLR and in some aspects even surpass it. So, let’s discuss those mixers in this article.

What is an Audio Mixer?

For any streamer, audio quality should never take a back seat. Whether it is your mic, in-game sounds, or playlist music, if you’re not able to manage it all in a clean and professional way when you’re live, your audience will immediately take notice.

This is where an audio mixer can come to your rescue. With multiple channels and faders or knobs, it will help you keep your stream from sounding like a bunch of mumbo-jumbo. It consists of several components packed into one body:

To sum it up, it’s basically a piece of hardware that provides you direct control over the audio of your stream. Based on your unique preferences and use-case, you can do any number of things you want with it, from controlling the volume of your audio sources independently, recording and playing samples, to using funny sound effects like reverb and echo.

With that being said, here are three technical points to keep in mind before making a final purchase:

As you might already know, the original GoXLR features four channels, enabling you to manage four independent sources of audio at the same time. So, when looking for an alternative, make sure to get a mixer that has a similar number of channels or at least enough to meet your requirement. Doing this will make sure that you can manage the audio of your stream effortlessly, like teammate chat, gameplay, music, and system sounds.

If you’re going to be using plug-and-play USB microphones with your mixer, this isn’t a huge concern. However, if you’re planning on using dynamic or condenser microphones, then make sure to note this point.

Since condenser mics require 48V phantom power and dynamic mics around 65db of gain from the preamp to function, it’s important to make sure that the audio mixer you buy is capable of supplying all of that.

Finally, you might want to double-check the connection ports included in the mixer. As a streamer, you probably own a wide range of speakers, headsets, and microphones. So, it’s important to make sure that the mixer you buy can accommodate all of them.

Besides this, you also need to consider build quality, price, and RGB. Of course, as always, I’ve made sure to keep all these points in mind when creating this list, but it’s important for you to know nonetheless. Without further ado, let’s dive into the list…

If you like the GoXLR but want a cheaper alternative, the GoXLR Mini is the most obvious choice to go for. Of course, as the name and price tag suggest, there are a few downgrades from its bigger brother. Before we get into that, let’s discuss the similarities between the two.

Keep in mind that most of the stuff is the same: the I/O port, the four motorized faders, the GoXLR software, along with 72db of gain and 48V of phantom power. However, when we get into sound processing and equalization, that’s when the differences become more clear.

The original GoXLR has a 10-band EQ whereas the GoXLR Mini has a 6-band EQ. There are also some other minor changes like the lack of a de-esser on the Mini. The biggest drop by far, however, is the sample pad and voice effects engine.

Overall, though, the GoXLR Mini is an excellent audio mixer. You’re getting most of the main features of the original GoXLR with some of the extras cut out. At this price point, it’s more than acceptable and makes for a great addition to any streaming setup! 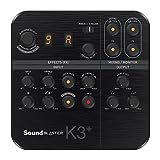 Coming in at just under $100, the Creative Sound Blaster K3+ is the best audio mixer to go for if you’re working with a tight budget for your streaming setup. Among other things, it features nine adjustable Reverb effects, 48V Phantom power, and a sample pad along with pitch correction effects.

The primary downside that many users have pointed out, aside from the lack of a mute button, is the confusing layout. Although it’s labeled and there’s plenty of guidance if you’re stuck, it can take time to get used to.

However, if you’re just starting out as a streamer and want a decent sound mixer to make sure your audio game is on point, the Creative Sound Blaster K3+ is more than sufficient. You can use some of the presents in the beginning and then create your own settings after you get the hang of it. 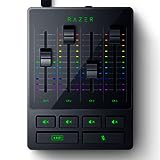 At first sight, it’s easy to dismiss the Razer Mixer as just a copycat of the GoXLR Mini. It features four channels each with their own motorized faders, identical I/O, and a largely similar design. There are six buttons: four dedicated mute buttons for each channel, a bleep button, and a mic mute button, which activates the pre-configured voice changer effect if held down for two seconds.

However, there are some differences that are useful to know. First of all, there’s a dedicated phantom button and a USB-C port on the back of the device. Add on top of that all this software support, like the Streamer Companion app, Razer Synapse, and Razer Chroma RGB, and you’ll find that there’s a lot to like here.

The Razer Mixer fulfills its purpose as an audio mixer, but at the same time, it’s also great to look at and adds a unique vibe to your setup. I’d recommend it to streamers who are either looking for the GoXLR Mini but want a more updated design or are just huge Razer fans. 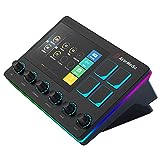 If the Elgato Stream Deck and the TC Helicon GoXLR got married and had a child, the result would be the AVerMedia AX310. Featuring a 5” IPS touch screen, it also provides you with six individual audio channels, four function buttons, and six audio dials.

Of course, as a result, you get the added benefit of both software and hardware to control your audio. Using the Nexus app, you can customize the touch screen however you want: drag and drop widgets, add hotkeys to the function buttons, check viewer count, and monitor Discord chat.

On the back of the device, you’ll find the I/O panel with inputs for your mic and headphone along with other external devices. Plus, if you’re going to be using an XLR mic, you’ll appreciate the +48V phantom power availability.

Overall, the AVerMedia AX310 might be on the pricier side of the spectrum, but it still packs a punch. It’s a perfect pick for someone who wants a touch screen on their audio mixer, which is something that the GoXLR itself doesn’t feature. If that describes you, definitely put this one on your list! 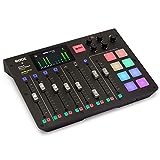 If you’re an audiophile, you’ve no doubt heard of Rode by now. You might even have one of their headsets or microphones in your streaming setup. With that in mind, it’s only logical to go ahead and get one of their audio mixers too. In that regard, the RODECaster Pro is an excellent choice for both beginners and experts.

You’re getting all the bells and whistles you might expect: four high-quality mic channels, eight programmable sound effect pads, and eight faders to control audio levels. Although it doesn’t feature its own software, you can connect it to your PC via USB and use any popular recording software.

As you might be able to tell from a single look at it, it’s not exactly intuitive. However, if you take the time to learn it and use it to your advantage, it could be the perfect companion in your streaming journey.

What is the Best Virtual Audio Studio Mixer Software?

If you want to go digital and use a virtual audio studio mixer instead, you have plenty of options available. The main ones you can find are VB-Audio VoiceMeeter Banana, Voicemod, and Adobe Audition.

Of course, having a hardware device dedicated to this purpose sitting on your desk at an arm’s reach is much more convenient. However, the benefit of using software is lower cost and more flexibility.

If you have way more audio sources than the average Twitch streamer, the general-purpose mixers out there which have around four to six channels won’t cut it for you. I’d recommend going for the Yamaha MG10XU, which is available in variants ranging from 10 channels all the way to 20 channels. In addition to that, G-Mark GMX1200 is also a solid option with 12 channels for under $200.

What’s the Most Minimalistic Sound Mixer?

I understand that looking at so many knobs and faders at once can be overwhelming, especially if you haven’t used similar equipment before. So, if you want to go for the simplest sound mixer out there, I’d recommend the Elgato Wave XLR.

It features a single multi-purpose knob but it provides 75db of low noise gain for dynamic mics along with 48V phantom power for condenser mics, so it’s no less capable than the other options on this list. Plus, as with most Elgato products, you also get the Wave Link software, which provides further functionality.

I can’t deny that the GoXLR is still the most popular and well-known audio mixer in the streaming community right now. However, if it’s out of your budget, there’s no reason for you to give up on the idea of having a professional audio mixer in your setup altogether.

In the above article, I introduced you to five worthy alternatives, almost all of which are less than half the price of the GoXLR with some added premium options too. Here is a quick rundown: