The PlayStation 5 entered the market back in November 2020, and it has since been a difficult console to get. Even in February 2022, Sony was still struggling with the PS5 supply. And if you are planning to get this console for yourself, you might be wondering how big is this console and how much does the PS5 weigh. Well, in our guide, we are going to explain everything you need to know about its weight, size, etc.

Learning about the size of the PS5 before getting it can help you clear the required space near your TV or shelf. Before the console was released, there were many speculations about its weight and size. But now that it has been in the market for quite some time, we have the actual figures.

How Much Does The PS5 Weigh?

To begin with, let’s first take a look at how much this console weighs. As expected from a console of this size, the PS5 weighs 4.5kg, which is around 9.9lbs. If we compare it to its competitor, it’s slightly heavier than it, as the Xbox Series X weighs 4.45kg, which equals 9.8lbs.

While the difference isn’t huge, people still need something to use in the forever ongoing PlayStation vs Xbox debate. 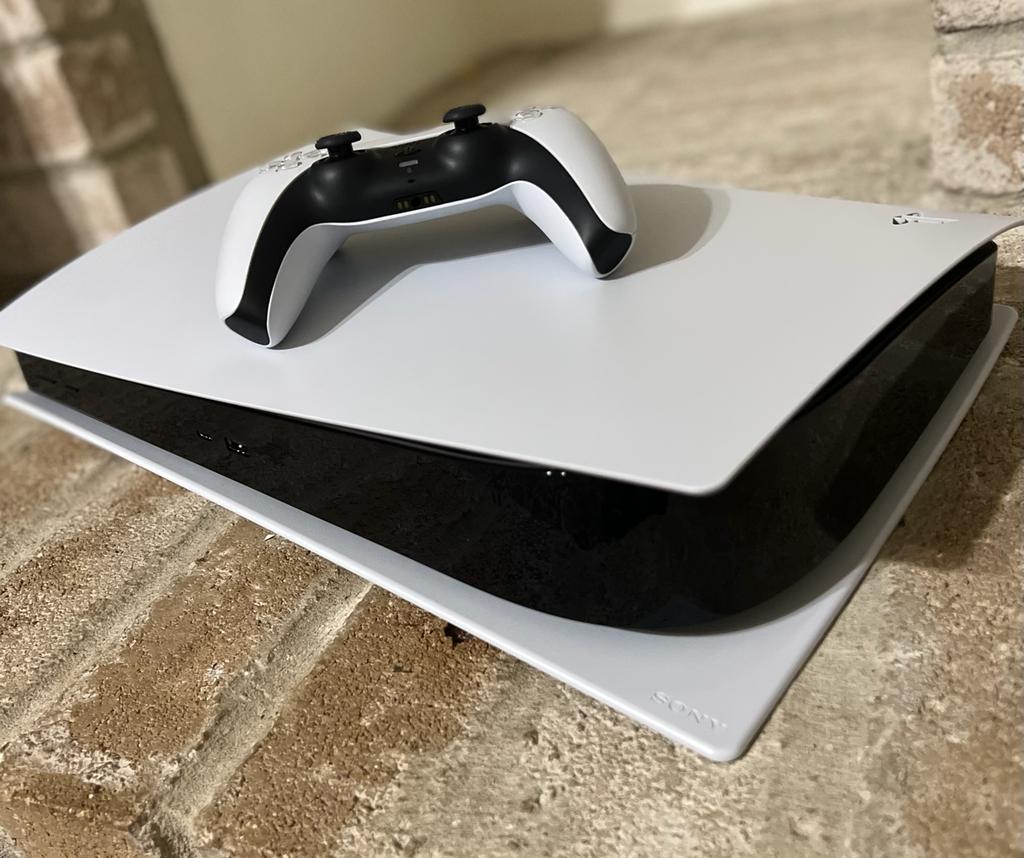 How Much Does The PS5 Digital Weigh?

An important thing to keep in mind is that there are two versions of the PS5, with one allowing users to use discs and the other one being completely digital. As there isn’t any disc drive in the digital version, it weighs only 3.9kg, which is around 8.6lbs.

What Is The Heaviest Component in the PS5?

The cooling system of PS5 is amazing, and it’s one of the reasons why the console weighs so much. The console comes packed with a 45mm thick cooling fan, thanks to which you can play games for hours without worrying about overheating issues.

The disk drive on the regular version of the PS5 also contributes to its weight. As you can see in the above section, the disk drive adds around 0.6kg more to it compared to the digital version.

Can I Lay The PS5 On Its Side?

During their initial announcement, both versions of the PS5 were advertised vertically. This made a lot of people confused about whether it can be laid on its side or not. But after it arrived on the market, it was discovered that it is possible to make the PS5 lie on its side. This can be done by using the console stand which comes inside the box.

The console stand can be used to make the PS5 stand vertically. But you can also adjust it beneath the console to make it perfectly lie down horizontally. The clips of the stand will fit into the rear fan but will not properly attach. Therefore, make sure not to push the PS5 too much.

Will The PS5 Overheat If You Lay It On Its Side?

If you set up the PS5 horizontally, make sure to leave enough space behind it for the air to flow. Otherwise, you might face heating issues. However, there won’t be any difference in the fan noise in both positions.

How Much Does The PS5 Weigh With Box?

Of course, you might be wondering how much this console weighs with its box. Well, we got you covered in this as well. The PS5 box contains plenty of stuff that comes with the console. Inside the box, you will find the following additional equipment:

Surprisingly, the box itself isn’t that heavy as Sony was kind enough to make it with recyclable materials. Sony tried its best to keep the use of plastic and glue low while creating the packaging.

With the PS5 placed inside the box with everything else, it weighs 6.7kg, which converts to 14.8lbs. Therefore, the PS5 weighs almost double with box. As for the digital version of the PS5, it weighs 5.8kg with the box, which is around 13lbs.

What Are The Dimensions of the PS5?

This was everything you needed to know about the PS5’s weight and size. As you can see, the console is pretty big. Even if you are opting for the digital version, you will need to clear some space near your TV if you want to place this huge console next to it. Furthermore, whether you’re placing it horizontally or vertically, make sure to leave some space behind the PS5 in order to prevent heating issues.

How To Fix MW2 Files Failed To Validate – [Easy Guide]